The Bene Gesserit: The Cunning Coven

The Bene Gesserit sisterhood of Frank Herbert’s science fiction masterpiece, DUNE, are a potent force who are certainly viewed as witches in that universe, so, we’re including them. Plus, they’re just cool. Quoth Wikipedia:

Sometimes called “witches” due to their secretive nature and misunderstood powers, the Bene Gesserit are loyal only to themselves. However, to attain their goals and avoid outside interference, they often screen themselves with the illusion of being loyal to other groups or individuals. Their every move is calculated toward a result. As the skills of a Bene Gesserit are as desirable as an alliance with the Sisterhood itself, they are able to charge a fee to school the women from Great Houses, and install some of their initiates as wives and concubines to their advantage.[2][6] In 1965’s Dune, the Princess Irulan is quoted (via epigraph):

The Reverend Mother must combine the seductive wiles of a courtesan with the untouchable majesty of a virgin goddess, holding these attributes in tension so long as the powers of her youth endure. For when youth and beauty have gone, she will find that the place-between, once occupied by tension, has become a wellspring of cunning and resourcefulness.

— from Muad’Dib, Family Commentaries by the Princess Irulan 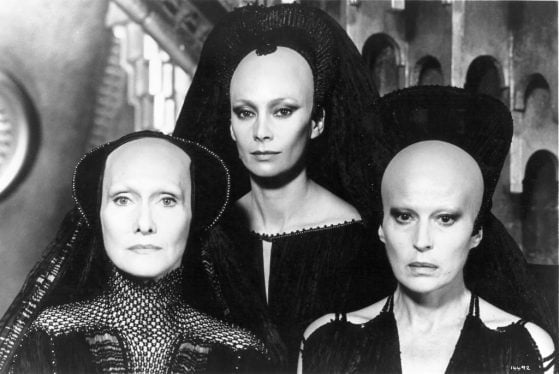 “This is just a publicity still. We’re not a coven.”

While the Bene Gesserit sisters have a variety of talents, one of their most infamous is “The Voice” — effectively, the power of suggestion that an compel actions on the part of their targets, including driving physical actions. The Voice is only one of an arsenal of abilities the Bene Gesserit possess, but it’s certainly one that causes great alarm among others in the DUNE universe, and lends to the perception of them as witches. Here’s a great scene from David Lynch’s DUNE (1984) that illustrates the power of The Voice:

Fear is the Mind Killer

“Did you really think that you could bear the Kwisatz Haderach? The universe’s super being? How dare you. My greatest student, and my greatest disappointment.”