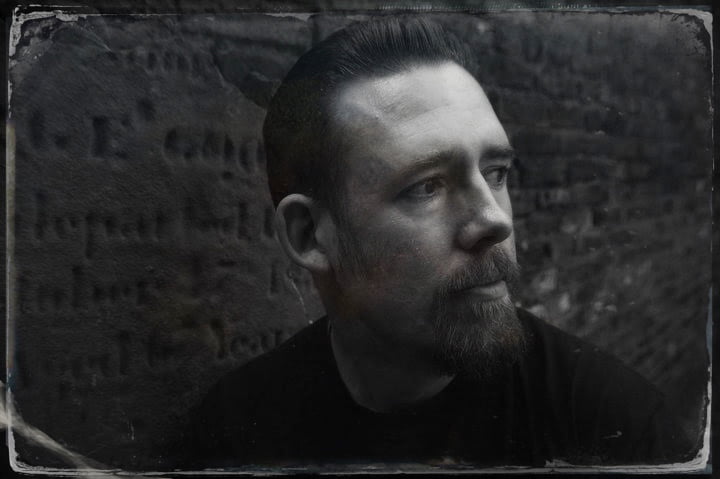 His work has appeared in Lackington’s, Aurealis, Not One Of Us, Hinnom Magazine, Cabinet des Feés and Pantheon Magazine amongst others. In 2014, “Call Out” (first published in Innsmouth Magazine) was reprinted in The Best Horror Of The Year 6.

From 2014 he  has worked with Becky Cherriman and Imove on Haunt, the Saboteur Award shortlisted project inspired by his own teenage experiences, about Harrogate’s haunting presence in the lives of people experiencing homelessness in the town.

“The Jaws of Ouroboros”

My favorite season by far is Autumn. The heat of the summer has faded a bit and the light takes on a golden honey quality. There’s something about drawing close to home that I like. One of the aspects I really like about living in Germany is that there are lots of autumnal decorations. They capture the season’s colors without relying on the Halloween kitsch. There’s change in the air in Autumn and I really like that.

I grew up in the late seventies and early eighties. Popular culture in England at the time had a very unsettling feel (to get an idea, have a look at Scarfolk). TV was Sapphire and Steel, Chocky, Tales of the Unexpected, Tripods and Dramarama. We read books like Usborne’s The World of the Unknown: Ghosts. This meant that places were imbued with this same unsettling nature. The woods were the home to alien black cats and you always felt one step away from seeing a ghost. It’s this link between horror and place which, for me, lies at the heart of folk horror. Even in the most innocuous landscape, there can be something lurking unseen. I think I’ve been looking for what’s lurking there ever since.

Because of my interests, I joined the Folk Horror Revival group on Facebook and covered their first event at the British Museum for the magazine Fortean Times.

It’s about a feeling and atmosphere rather than specific films, for example. For me, it’s the unsettling behind the idyllic. There is this idealized rural landscape that is often held up in England particularly (for example W.G. Hoskins Making of the English Landscape), which glosses over a lot of the darkness and unsettling nature of the fields and woodlands.

I have a very good imagination so there have been a few. Where I grew up there was on an area of deserted railway known locally as ‘the ‘Airy Mountains’ (I’m guessing after the William Allingham poem, The Fairies) that led to a wooded gorge. We used to play down there a lot as kids, and there was supposedly an escaped big black cat down there.

Also near where I grew up, there is Fewston Reservoir, which is edged in woodland. We were walking there one day and dusk came in. There was an overwhelming sense that we did not belong in the woods at that particular time of day.

As well as my magazine work I would like to bring out a collection of my flash fiction in the next few months. I’ve just finished the first draft of a novella, which I have to sit down and edit. I’ve got an unpublished novel I’m sending to agents. I’ve also just brought out a small collection called Ruby Red & Snowflake Cold, with the artist Hazel Ang. As ever I’m writing new short stories. It’s very busy at the moment!