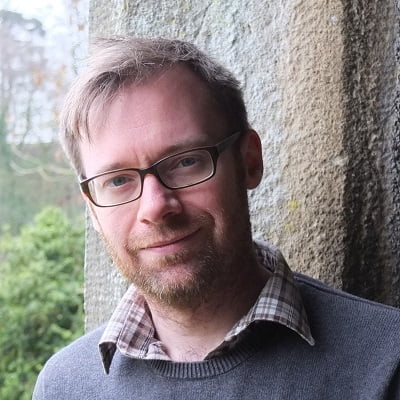 Tim Major’s recent books include SF novel Snakeskins, short story collection And the House Lights Dim and a non-fiction book about the 1915 silent crime film, Les Vampires, which was shortlisted for a British Fantasy Award. His latest novel is Hope Island (2020, Titan Books). His short stories have appeared in Interzone, Not One of Us and have been selected for Best of British Science Fiction and Best Horror of the Year. Find out more at www.cosycatastrophes.com

I suppose I’m more drawn to the peripheral aspects of Folk Horror than the actual rituals and land-working that are, arguably, key to the genre. My childhood was in 1980s northern England, where I was surrounded by the kinds of creepy iconography, especially in public health messaging, that inspired the imagery of the Scarfolk blog and the ‘hauntological’ music of artists on the Ghost Box record label. While I watched and loved The Wicker Man at precisely the right age (i.e. technically far too young), and love the genre in film, my writing is as much influenced by the mundane aspects of my own childhood and the relatively small community in which I grew up.

Where did the inspiration for your FIENDS II short story come from?
I’m interested in the fact that the Folk Horror label was first inspired by the ‘unholy trinity’ of The Wicker Man, The Blood on Satan’s Claw and Witchfinder General. The tone of these specific films, all from the late 1960s or early 1970s, seems to me as key to the genre as the ‘rules’ about the nature of the stories. So, I wanted to write a Folk Horror explicitly about an attempt to create a new British Folk Horror film, in which the film set would become far weirder than the film itself.

What is your favorite kind of tree, and why?
Silver birch, without a doubt. Part of the reason I was so keen to buy the house in which I now live was due to fact there’s a huge, established silver birch in the back garden. I love the papery bark that it sheds.

How has the Coronavirus pandemic impacted your writing?
For the first three weeks, I couldn’t write a thing, and it made me miserable. Part of the issue was purely practical – my wife and I have two young sons, who now require home-schooling (or rather, constant entertaining) – and part of it was a sort of paralysis, as well as the feeling that writing seemed trivial in the face of everything else that was going on. But I soon got back up to speed, somehow finding a few hours each week on top of freelance editing work, and I’m pushing projects along steadily. I’ve made writing such a core part of my identity over the years that without it I don’t know who I am.

What’s next for you, in terms of writing projects?
My new novel, Hope Island, has just been released, which certainly bears the influence of Folk Horror. I’ve just finished drafting the novel after that, which is a bit of a departure – a Victorian fantasy. There’s a Mars murder mystery novella in the works, and I’m just cranking up planning my next novel, which seems like it’s going to be bigger than anything I’ve attempted before – a product of lockdown mania, I suspect.