Song of the Red Squire 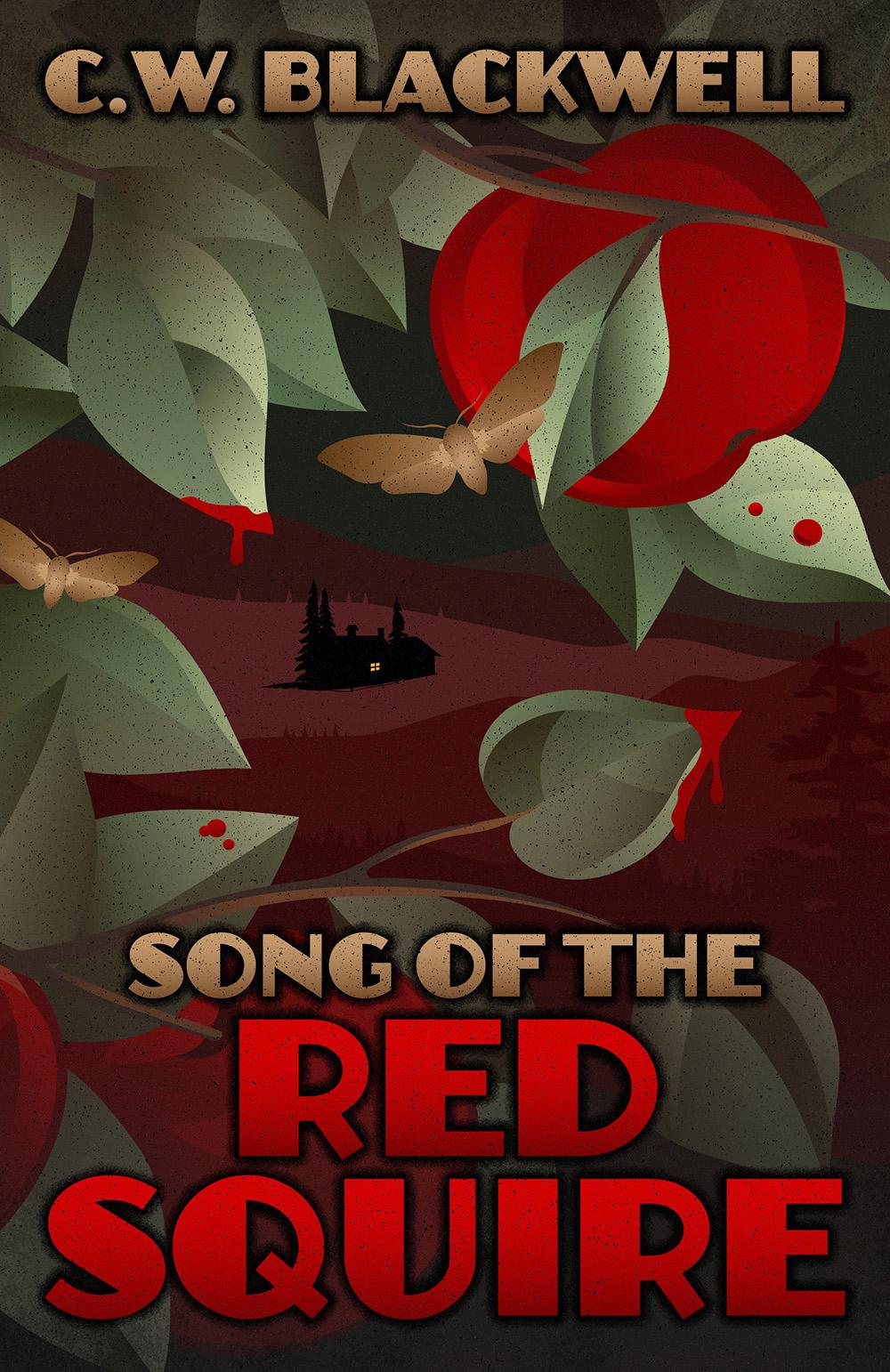 North Carolina, 1949. When agricultural inspector Charlie Danwitter is sent on a special assignment to bucolic Ashe County, he expects an easy job cataloging heirloom apple varieties. However, when the local farmers grow suspicious of his motives, Charlie finds himself in far more trouble than he bargained for. In an attempt to salvage his assignment, he follows a mysterious woman deep into the beating heart of the Blue Ridge Mountains to a long-forgotten village where harvest rituals are rooted in bizarre Old World customs—and discovers that some traditions are better left in the past.

It’s no secret C.W. Blackwell is a Renaissance man when it comes to writing. His short dark fiction has appeared in genre anthologies highlighting a broad range of horror, including psychological, folk, and gothic. His flash fiction “Memories of Fire” snagged a 2021 Derringer, a prestigious award named for the pistol, bestowed by the Short Mystery Fiction Society. It’s no surprise, then, that his latest release, Song of the Red Squire, should both straddle the line between genres and simultaneously shine in both of them.

Part crime fiction noir, part folk horror, Squire follows Charlie Danwitter as he documents apple varieties for the USDA in the late 1940s. Blackwell, a seasoned maestro in penning historical fiction, nails period details with the sharpest of hammers, from subtle setting description to cadence in dialogue. Charlie is a sympathetic but complex protagonist, a World War II veteran still shell-shocked from the battlefield, shoveling barbiturates into his mouth like Tic-Tacs, trying desperately to tamp down the terrifying flashbacks described in a series of haunting tableaus that wax and wane through the novella: “From the sea of fog rose a strange ethereal figure. A wraithlike face with moon eyes and a great void mouth. The head twisted and bore its nightmare eyes on the train. It seemed fixed on Charlie’s window as it crested the summit and came wending into the valley, white tendrils casting about like spiders’ legs.”

The book begins with Charlie arriving at his destination, a rural corner of North Carolina famous for its wide variety of apples, but something isn’t right. The character can’t put his finger on it, and neither can the reader, but the author pokes tiny pricks in the Americana fabric, creating a sense of unease almost from the start. Area farmers are more than reluctant to participate in the interloper’s project, so when given the opportunity to travel to an even more remote area that might be more cooperative, Charlie jumps at the chance without hesitation. Blackwell nudges us, though, that something darker awaits his hero with subtle details: a report of a colleague on a similar excursion going suspiciously missing, a bizarre discussion with a roadside beekeeper about deadly stings, a car accident that leaves a female passenger injured and dazed. In the last, the victim “shut her eyes and took a long shuddering breath. When she opened them again, she was staring right at him. ‘You got a dead man’s voice,’ she said. ‘Don’t hear no life at a-tol…Sing me a dead man’s song,’ she howled. ‘Sing it with grave roots wrung about your throat. Sing it from your rotten grave!’”

One is reminded of the most successful of classic noirs and psychological thrillers as Squire progresses. When Charlie tries to navigate the ominous secrecy surrounding the farmlands, echoes of Chinatown’s Jake Gittes poking his head into California’s water shortages resonate; when Charlie attempts to outrun his nightmares of the war while trying his best to salvage his career, whispers of Shutter Island’s Teddie Daniels fixating on the mysterious disappearance of a guarded patient waft by.
​
Squire is certain to please the most nitpicky of both crime fiction and folk horror fans as it both embraces and reinvents the most well-trodden tropes of each genre. Even as Charlie is warned to stay away, readers will be on the edge of their seats, pushing him to keep going, even if it might mean their hero will be wading out too far to ever return. A local cautions Charlie, “Son, you’ve got to keep the Devil at your knee. Let him curl up at the end of your bed on a windy night. Feed him scraps from the table. A hungry devil is a dangerous one indeed.” Readers, take heed: Song of the Red Squire will kidnap and keep you captive until the very last page, and after finishing, you’ll likely never drive through a stretch of unfamiliar rural landscape without holding your breath again. —Rebecca Rowland, Ginger Nuts of Horror review

C.W. Blackwell serves up a potent folk horror noir novella with “Song of the Red Squire” — he digs deep into his fondness for crime fiction in his approach with 1940s Appalachia. The protagonist is Charlie Danwitter, an agricultural inspector and battle-haunted WWII veteran who is wrestling with building his postwar life in 1949. He’s committed to his mission in an interesting way, in that he’s not an FBI G-man, but he is still a federal agent, and he takes his work seriously.

This resolution puts him at odds with the locals whose crops he’s investigating, who do not welcome outsiders and most definitely do not appreciate having a government agent poking around their orchards. In this setup, Blackwell nicely channels WICKER MAN-type folk horror motifs while putting a very American spin on it.

One of the strongest early elements of this novella is the snappy verbal interplay between the characters, which evocatively conjures up the retro vibe Blackwell’s working with. Everybody’s full of sass and moxie, and even Charlie, ostensibly the by-the-numbers hardcase surrounded by the rustic locals taunting him directly and indirectly, lobs a few well-placed zingers.

That gleeful, even playful use of crisp, tartly noir-flavored language serves as camouflage for the deeper, darker secrets lurking in those old Appalachian mountains. As Charlie enlists the aid of some friendlies in his quest (keeping mum to avoid spoilers), the folk horrific darkness starts to increasingly envelop Charlie, without him necessarily realizing the danger he’s in. Blackwell nicely captures North Carolina, in setting and characterization — that vibe itself is an unspoken character in the story, as much as the various colorful locals.

As Charlie’s quest deepens, and he finds himself caught up in some decidedly insular, pagan high country festivities, the story sheds its crime fictional style in favor of a more lyrical, folk horrific, and even cosmic horrific style that throws Charlie’s military experience, his government procedural finesse almost literally out the window, leaving him terribly isolated and vulnerable in what turns out to be a shattering experience (again, avoiding details for the sake of spoilers).

Suffice to say that what started out as a fairly straightforward fact-finding mission dissolves into a descent into near-madness in bearing witness to the occult rituals and entities he encounters. Blackwell excels at maintaining Charlie’s character even as he’s consumed by things he cannot fully understand.

“Song of the Red Squire” delivers as a folk horror vehicle, firing on all of the necessary cylinders like a well-tooled old pickup truck wending its way down a lonely, well-worn country road coiling into an ancient mountain. The pacing is good, and, as a reader, I just wanted Charlie to get the hell out of where he was, even as he kept pushing himself deeper into jeopardy out of a sense of duty and obligation. I won’t spoil the ending, but Charlie’s never the same after this one, and nobody who reads this’ll be the same, either! It does for apples what JAWS did for beaches! I honestly always think of the Red Squire any time I see apples! — Dave, Goodreads review

C.W. Blackwell gifts a story to the annals of folk horror with Song of the Red Squire, a novella in a hundred pages. We follow Charlie Danwitter into the insular and shadowed hills of 1949 Appalachia as he seeks to catalogue apple varieties on the verge of big agribusiness extinction.

A little overwhelmed by the sharp punch, so I’ll tell you what I admired and loved:

1. Charlie Danwitter is a character with verve. He’s alive and complex and, from the first note of his voice, you cease to know him as a character in Blackwell’s imagination. He’s real and you want to know him better.
2. Blackwell captures the postwar world of 1949. Danwitter fought in WWII, and this experience shaped his character and several other characters in the book. There’s an embryonic Cold War in the background, too, but subtle. The cars, trains, and phones also lock you into the late 40s.
3. The dialogue has verisimilitude and wonderful humor. Blackwell is intentionally funny when he makes characters be unintentionally funny.
4. Importance of place in the narrative. Rural North Carolina is captured in fine strokes without caricaturing Appalachia and its people. It’s clear the author utilized a sensitivity reader in his portrayals. Blackwell uses realism appropriately, keeping a narrative that turns fantastic grounded.
5. The poet in the author shines through in his descriptions. With a single line, he paints a world. With a paragraph, you live in that world. With a chapter, you can be traumatized by that world.
6. The narrative opens and moves in a manner that reminded me of the best crime fiction of the 1950s. The pacing was excellent.
7. Blackwell shows a penchant for the bizarre. The festival in act III rivals eldritch glimpses of the weird found in Thomas Ligotti.

A smart folk horror tale that will tempt you to read with haste (the story is too well-crafted to be otherwise), but avoid reading quickly if you can. Savor it because you’re dealing with a storyteller that values and understands the craft of fine writing. Appreciate the layers. —Coy, Goodreads review