Nosetouch Press is an independent book publisher tandemly-based in Chicago and Pittsburgh, dedicated to publishing some of the most energizing fiction in American and international literature today. With a commitment to classic book design within an increasingly digital environment, Nosetouch Press brings innovative and authentic approaches to a lasting tradition of literary excellence.

What does the asterisk mean? To Nosetouch Press, it is an artistic understanding that sometimes the best things are found in unexpected places. We look in the margins as readily as we pay attention to and try to find the newest, most exciting authors currently out there. The Nose Knows is the promise of Nosetouch Press, that we’re following our noses to find the best fiction authors can produce, for readers who yearn for a satisfying reading experience. Look for the asterisk, and know that we’re looking out for you, whether you’re an up-and-coming author or a discerning reader of fiction. 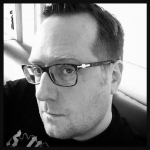 “Stick to your weird guns.”

Dave has worked as an editor for over 25 years, including a decade at the University of Chicago Press. He has written fiction for most of his life, with a particular fondness for Ernest Hemingway, F. Scott Fitzgerald, J.D. Salinger, Michael Moorcock, Flannery O’Connor, Shirley Jackson, C.M. Kornbluth.

He’s published The Wolfshadow Trilogy, , THE HAPPENING, and NORM, the Lovecraftian horror-thriller, CHOSEN, the cheeky-chic vampire novel, SUCKAGE, and the creature-feature novellas, RELICT, SUMMERVILLE, and THE DAY OF THE NIGHTFISH.

His short stories have appeared in Albedo 1, Ireland’s premier fantasy and science fiction magazine, and he won second place in their Aeon Award in 2008 for his short story, “Aegis.” He also received in 2009 Honorable Mention, “Best Horror of the Year,” edited by Ellen Datlow for both “Aegis” and “Rotgut.”

He was Runner-up, 2013 Best New Novel by a Chicagoan, Chicago Reader, for “Suckage”, and was shortlisted for the 2012 Aeon Award for “Day of the .”

Dave loves horror movies, Westerns, Venetian masks (and Venice, in general). He adores New Orleans and Southern Gothic in particular. Where music is concerned, he’s a human jukebox, and knows or can talk about almost any musical genre (excepting Country music, which he does not like). Dave loves to cook, and often sneaks in details of fine cuisine into his fiction, particularly when he’s writing while hungry, and he does great Mark Hamill and Heath Ledger Joker impressions. 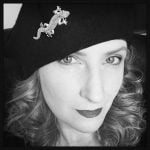 “I cut my teeth on ectoplasm.”

Hearty of laugh and quick of wit, Christine has been a professional graphic designer/website developer & brand consultant for over 27 years. She is an ardent book designer, intent on creating works that support the vision of the author, create a pleasing yet unobtrusive experience for the reader, and both refer to and expand upon the methods of the art of bookmaking.

Christine is a freelance graphic and web designer, brand consultant, and video marketing creator, operating under the name Clever Crow Consulting and Design. She is also the webmaster of albedo1.com, Ireland’s premier magazine of science fiction, horror, and fantasy.

Also a visual artist, Christine uses mixed media to craft a world-within-a-world that communicates a playfully unnerving take on the contradictions, absurdity, and strangeness of postmodern American life, with a focus on reuse of the discarded and philosophical interpretations of the unseen.

A reader of all genre fiction (fantasy is her favorite), she also has a particular fondness for gothic tales, ghosts, and witches—send any good ghost stories (real or fictional) her way. Raised on Nancy Drew, the Dana Girls, and Beverly Gray, she savors a well-crafted mystery.

Christine was recently selected as a contributor to the Game of Thrones: The Compendium. View the book and her work here…