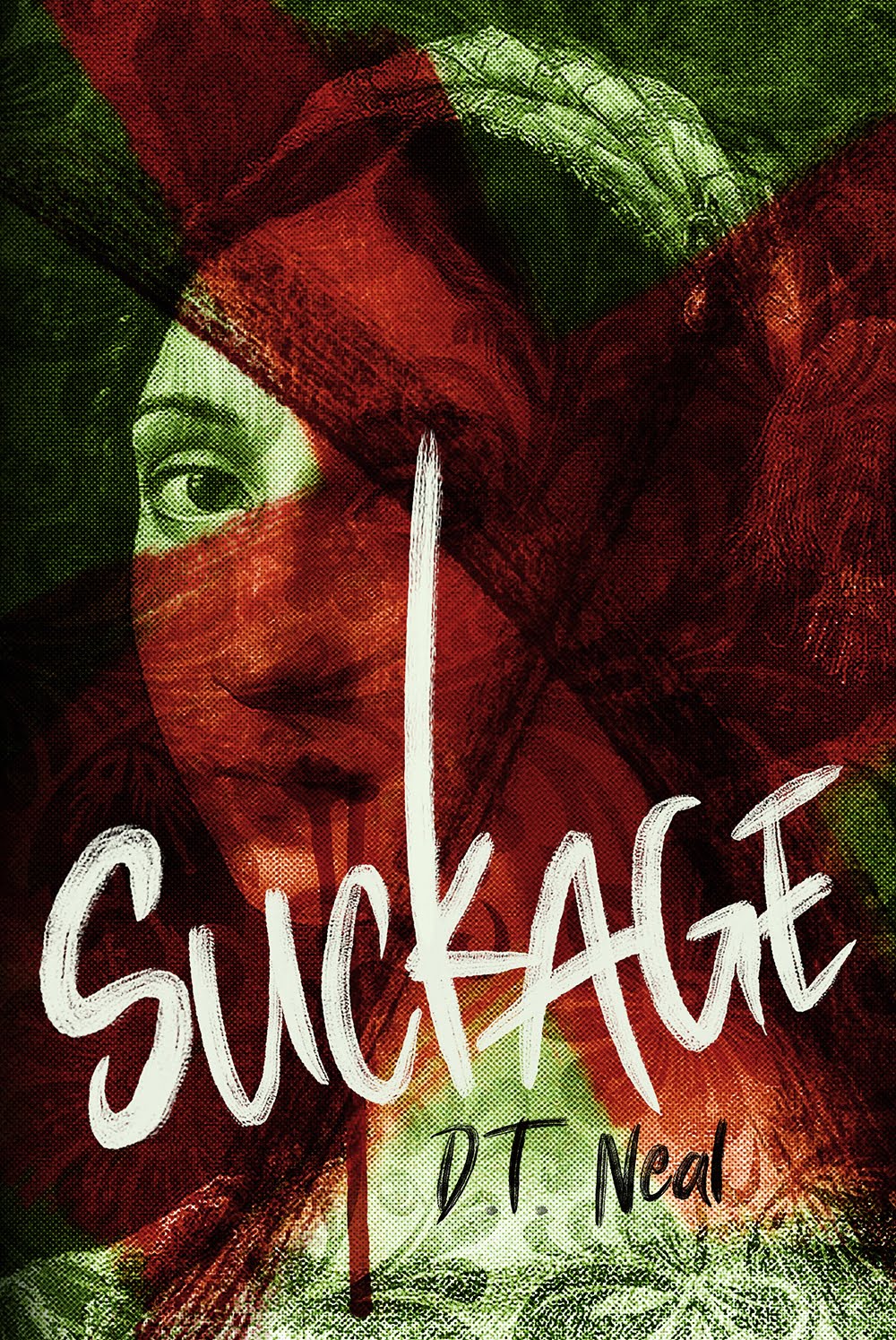 “Suckage by D.T. Neal is a refreshing take on the classic vampire story that delivers more than just thrilling action…Going above and beyond the call of duty, Suckage delivers the full package: blood, guts, and love. With thoroughly developed characters, intriguing narration, and moral commentary, Neal creates a self-aware and refreshingly frank story likely to appeal to a variety of readers.

Vampires suck. Nobody knows this better than Nathan Sharp, the latest minion of Iris Augenblick, a Venetian vampiress who has been roaming the world in a centuries-old game of cat-and-mouse with her ancient Russian maker, Alexei, before finally settling in Chicago.

Crossing fateful paths with Iris one night, Nate thought he’d found paradise, only to eventually see the bloody reality behind the nightlife of his undead mistress, and the cold brutality of vampire politics. The only thing worse than being a vampire’s victim is being their minion. And if you think serving one is hard, try leaving one behind and living to tell the tale.

Part minion’s memoir, part fractured love story, part critique of vampirism itself, “Suckage” escorts you through the moonlit streets of Chicago and into the very darkest corners of the human spirit with audacious wit, horror, and humor.

4.0 out of 5 stars IndieReader Review

“Suckage” by D.T. Neal is a refreshing take on the classic vampire story that delivers more than just thrilling action.

Nathan Sharp, a self-proclaimed good-looking Art History himself vulnerable after an ugly breakup with his long-term girlfriend, only to be swept up under the wing of Iris, one of the top vampires in Chicago. After losing five years of his life under her employment as a of prey, Nathan decides to end this immoral lifestyle forever. But leaving a vampire is harder than he imagined.

While this novel is full to the brim with action, blood, and gore, Neal takes the time to also fully develop each character. From Iris’s complicated past and manipulative to Nathan’s internal struggle against his will to serve and his need leave, to Jennipher’s disappointment and confusion in dealing with her new life, Neal gives each character qualities that humanize even the nonhuman. With such a fantastical setting, “Suckage” could have been unbelievable and, thus, hard to relate to. Instead, Neal brings the reader a world in which the harsh reality of vampires is a given.

One of the most compelling components of this novel is the way in which the story is delivered. The reader sees the action through the eyes of the , snarky Nathan. With such dry commentary as, “Nobody just walks up and says ‘Hey, I’m a vampire. Want to go somewhere?'” Nathan gives the reader a brutally frank view of the underworld. By infusing humor into an otherwise dark story, Neal creates a compelling read on many levels.

Before reading this work, however, the reader should be warned that there are a few instances of sexual content, as well as copious vulgar language. While the swearing fits in well with the vernacular of Nathan Sharp, it often bogs down sentences rather than punches them up. By using stronger verbs and adjectives, the author might have been able to avoid creating a novel that could offend some readers.

Though “Suckage” is essentially a classic vampire story, it goes beyond that role and deals with the more complex issues common in the real world. Nathan’s struggles with Iris reflect the problems that come from unhealthy, dependence-based relationships. Meanwhile, his internal, moral struggle brings him to question Iris’s behavior, to which she curtly responds “Sweet Nate, you’re too far in the game for conscience, my love.” This doubt brings out one of the major themes of this work: the struggle between the immoral and the moral. This classic battle is brought to a head when Iris lures three vampire hunters to her lair and pits them against each other as she slowly turns them one by one into vampires. Nathan knows that “the moral thing, the human thing, would have been to release the men from their prison,” but still he falters due to his love for Iris. While the scenes may be unearthly, the moral problems and consequences are similar to those of the real world.

Going above and beyond the call of duty, “Suckage” delivers the full package: blood, guts, and love. With thoroughly developed characters, intriguing narration, and moral commentary, Neal creates a self-aware and refreshingly frank story likely to appeal to a variety of readers.

Reviewed by Claire Colburn for IndieReader.com